If you have a new and demonstably accurate fact about Markos C. Alberto Moulitsas ZÚÑIGA (MAMZ), or even just a hunch, please post these in the comments of any post here at Truth About Kos, or e-mail me at FrancisLHolland @ Gmail.com (no spaces).  Hunches often prove to be about demonstrable facts.  That's why I Googled the names of everyone and everything mentioned in MAMZ's now invisible honeymoon photo album, which is how we learned that MAMZ's family is part of the Salvadoran oligarchy.  (See right sidebar for links.)

The Truth About Kos doesn't follow MAMZ's daily histriconics because the purpose the the Truth About Kos blog was and is to utterly discredit MAMZ's effort to be seen as a "leftist", "liberal" or progressive".  This blog accomplished that task back in 2007, with The Indictment of Markos C. Alberto Moulitsas ZÚÑIGA (MAMZ) by Justice and History (Updated with Additional Information and Counts).

Once we realized that MAMZ claimed to have, e.g., two years of CIA training under his belt, we knew that no one who thinks as we do could ever believe anything MAMZ said about the past, the present or the future.

In my opinion, this is at least part of why "YearlyKos" was renamed "Netroots Nation"; with MAMZ-minions insisting the exposure of MAMZ's history did not discredit the work of the hundreds of eager and ignorant participants at DailyKos.  In my opinion, Kos was forced to distance himself from YearlyKos at least partially because "Kos" himself has been discredited.

Please send us those links that confirm (or do not confirm) what you have read when you've followed the links at the Truth About Kos.  If new information is discovered, I'll write a post about it.  If any statement of fact at this blog can be proved untrue, then I'll write a post about that as well.  (No one has ever proved anything at this blog to be untrue, except by demonstrating that MAMZ spent two years and not just six months at the CIA, according to a recording and a transcript of his own words of June 2, 2006, when addressing a question about the CIA and his blog's strange defense of the CIA.)

Some MAMZ minions back in 2007 argued that there was doubt about whether the fact that MAMZ "trained" at the CIA for two years proved that he "worked" there.  The CIA says that when you "train" at the CIA you "work" there.  If this distinction between "trained" and "worked" is the only defense MAMZ's minions can offer in the face of proof that MAMZ was at the CIA (2001 - 2003) when he started DailyKos (2002), then obviously MAMZ is defenseless in the face of the facts of his and his family's once-secret history and ongoing right-wing behavior in El Salvador. The Secret "Family Business" of Markos Moulitsas Zúñiga (DailyKos)

To my knowledge, MAMZ has never denied that he currently works at the CIA, or is an asset of the CIA, receives payments from or provides resources to the CIA. Since he said he was at the CIA for two years, I think he should address the question of his present relationship with the same organization. The fact that a MAMZ family member received a one million dollar loan guarantee from the US Government's Overseas Private Investment Corporation (OPIC) is indicative of the level of contact and mutual support between MAMZ's family and the US Government.

If you want to know if MAMZ is gay, I can't answer that.  However, I CAN point you toward his public confessions about his own sexuality and you can derive from that what you will.

One Google user came to this blog while looking for a photograph of MAMZ "shirtless." If anyone has such a picture, please post a link or location for it. If it's a real photograph then it constitutes "truth about Kos."
Posted by Francis Holland at 3:20 PM 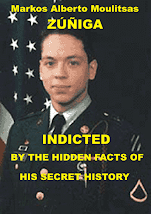